Internet sex predators are tricking children into abusing their own siblings and friends as new research reveals this “disturbing” trend is eight times worse than experts had feared.

A new study published ahead of the Internet Watch Foundation’s annual report reveals how internet sex predators are targeting children to have them abuse their siblings and friends*, as well as themselves, on camera.

The Internet Watch Foundation (IWF) is the UK-based charity responsible for finding and removing images and videos of children suffering sexual abuse from the internet.

The IWF has documented a rise in “self-generated” child sexual abuse imagery being created and shared online, often after a child has been groomed, bullied, or blackmailed by an adult.

A snapshot study of the three months between September 28 and December 23 shows IWF analysts are now seeing predators tricking children into involving other children, either siblings or friends, in the abuse.

According to the study:

•            511 self-generated child sexual abuse images and videos assessed in this period were determined to involve siblings.

Analysts said is clear that these children were manipulated or coerced into sexual activity by adults online via a live stream and that these videos and snapshots were subsequently shared widely using a variety of different web platforms.

There is also evidence that some of these adults were posing as other children. Sometimes the abuse would take the form of a game or ‘dare’ with no evidence that the children had any understanding of the sexual nature of what they were doing.

A further 24% was determined to contain Category B material, while 30% of the material was deemed to be Category C.

Susie Hargreaves OBE, Chief Executive of the IWF, said: “This tactic is emerging as a disturbing new trend in offender behaviour, and we know the youngest children are the most vulnerable, and often disproportionately suffer the worst kinds of abuse.

“Predators are now not only using the internet to contact, coerce, and abuse children – they are now using those children to get to other victims. Abuse often takes place in children’s own bedrooms, when parents think children are safe – playing with their siblings.”

There are fears this new trend may indicate predators are actively seeking to abuse more children this way.

In February, David Wilson, a roofer from King’s Lynn, was handed a 25-year prison sentence for 96 child sex offences.

According to the National Crime Agency, Wilson’s crimes included grooming children over the internet into abusing their siblings and friends.

Ms Hargreaves said when analysts were asked to look into the issue, it had been expected they may see this kind of abuse once a day.

Ms Hargreaves added: “The scale of the abuse has been particularly shocking. We know each image is a crime scene, and that all the children are real children.

“To see them coerced and bullied by dangerous predators into then abusing other children is beyond heart-breaking.

“If parents think their children are safe because they are inside the house, they need to know they are not. Predators can approach children and strike up a conversation using internet connected devices without parents even being aware.”

Children as young as three years old appeared to be involved in abuse. The average age of the youngest sibling was 10 and the eldest 12.

Whilst in most cases with two children, one was slightly older, there were some instances of more significant age differences of up to 5 years or more.

The full study appears in the IWF’s annual report which is due to be published on April 21. 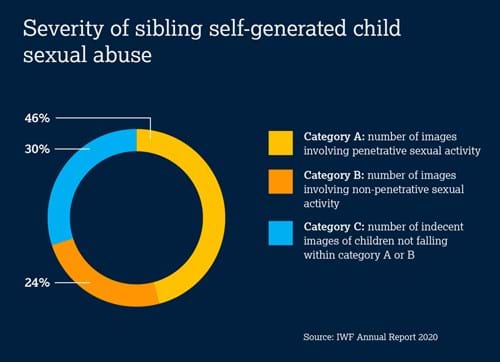 We’ve documented a rise in “self-generated” child sexual abuse imagery being created and shared online. We are now seeing how siblings are being encouraged to take part together.

Over three months between 28 September and 23 December we logged incidents of this.

Self-generated child sexual abuse imagery can often involve more than one child and it’s not easy to say with certainty whether the children are related.

During this study, our analysts flagged any illegal content that they assessed as likely to involve siblings. Then, our Quality Assurance team scrutinised that material to make an informed judgement as to whether the children could be related.

This decision was based on a variety of factors such as:

If we could not say that it was highly probable that they were related, the content was discounted.

Six sets of videos appeared more regularly than others: These were seen at least 10 times each, and one set was seen 51 times during the study. These videos varied greatly in terms of ages and activity observed including children aged between four, to teenagers.

In nine out of 10 times (92%), there were two children with one tending to be slightly older. In some cases, there were more than two children, but this was less common (8%).

The older child would often take the lead and involve their younger sibling.

The average age of the youngest sibling was 10 and the eldest 12.

Whilst in most cases with two children, one was slightly older, there were some instances of more significant age differences of up to 5 years or more.

It is clear to us that these children were manipulated or coerced into sexual activity by adults online via a live stream and that these videos and snapshots were subsequently shared widely using a variety of different web platforms.

We saw evidence which leads us to believe that some of these adults were posing as other children.

Children were observed reading comments and what were probable instructions – often getting close to the screen or reading aloud.

Through their conversations we were able to conclude that in many cases, children were being shown sexual material online and being asked to copy it.

Sometimes the abuse would take the form of a game or ‘dare’ with no evidence that the children had any understanding of the sexual nature of what they were doing.

We also saw some instances which indicated some of the children had been exposed to sexual content at an extremely young age; they appeared to have some level of understanding that the behaviour was ‘adult’.

Locations were almost exclusively domestic in appearance – a room within a family home.

Sometimes we could hear adults in the background behind closed doors moving around and talking just metres away from the children with no apparent knowledge of what was happening to the child.

Some children even quickly stopped the live stream at the call of an adult or a knock at the door.

This material was shared across all site types but was predominantly found via Cyberlockers (59%).

How does this study help our work?

We hope that by understanding the crimes committed against children, and how these can happen in the family home using the internet will help our, and others’, knowledge of the problem.

The regularity with which our analysts are seeing this trend is extremely concerning. Online offenders targeting children in this way and encouraging them into sexual activity with their siblings could lead to mental health challenges and physical damage.

Our work with industry, the third sector and government is critical to getting this illegal material removed quickly, but more needs to be done to help prevent it being created in the first place.

This study will help inform our awareness and educational campaigns.

What we saw: An 11 year old boy appears embarrassed when asked by his brother to engage in oral sex.

What we saw: A six year old boy was observed pointing to the screen, saying “like that”. This indicated to us that the pair were copying something they were being shown. The four year old girl that he’s with then says “ow”, and she starts to cry. The boy stops and looks nervous and confused.

What we saw: Three boys appear to be talking to a woman online. At times they are visibly shocked by what they are seeing. They read out apparent instructions from her including a request to take off their underwear and touch each other.

What we saw: Two girls take turns whispering in each other’s ear suggesting what they should do next.

What we saw: An eight year old boy is visibly upset by the things his older brother wants him to do.

What we saw: Two 11 year old girls offer to show their underwear for more ‘likes’.

On May 11, the European Commission announced its new European strategy for laying down rules to prevent and combat child sexual abuse.

The IWF was in Brussels to celebrate the 25th Anniversary of the IWF and to discuss forthcoming EU legislation to tackle Child Sexual Abuse and Exploitation.

Despite efforts to curb the amount of child sexual abuse material hosted on the continent, Europe remains the ‘destination of choice’ for criminals and predators determined to host criminal content.