The historic move, to install a reporting mechanism for child sexual abuse imagery online is thanks to a collaboration between the IWF, SCARJoV (Associação de Reintegração dos Jovens e Crianças na Vida Social) and INAC (Instituto Nacional da Criança). It illustrates Angola’s desire to prioritise making the internet a safer place for all its citizens, with a special focus on the youngest generation.

In Angola, the majority of the population are children. The average age of a citizen is just 16.5 years-old. Today, The Ministry of Justice and Human Rights is extending their existing efforts to defend the rights and welfare of children into the digital sphere. By building on previous campaigns focussing on trafficking, gender equality and dignity, the Ministry recognises the need to focus on the internet and tackle the issue of child sex abuse imagery online.

The IWF reporting websites, known as Reporting Portals, are web-based forms where citizens can report child sexual abuse imagery they may stumble across online. Portals offer priority countries around the world a place to safely report this illegal material to expert Analysts based in the UK, who then assess the reports and have the content removed.

Angola becomes the seventh country to launch an online reporting mechanism sponsored by the Global Fund to End Violence Against Children. It also brings the total number of global IWF Reporting Portals to 25.

The Reporting Portal will help keep all internet users safe online and ensure that the victims of child sexual abuse do not have to suffer the torment or revictimisation, with the knowledge that online images and videos of their abuse could be shared again and again. By the end of 2020, the total number of IWF Reporting Portals will be 48, thanks to the Fund’s grant to implement 30 Portals across the world.

It’s simple to make a report – just go to http://report.iwf.org.uk/ao (Portuguese) and follow the steps. The process takes less than two minutes and can be done completely anonymously. 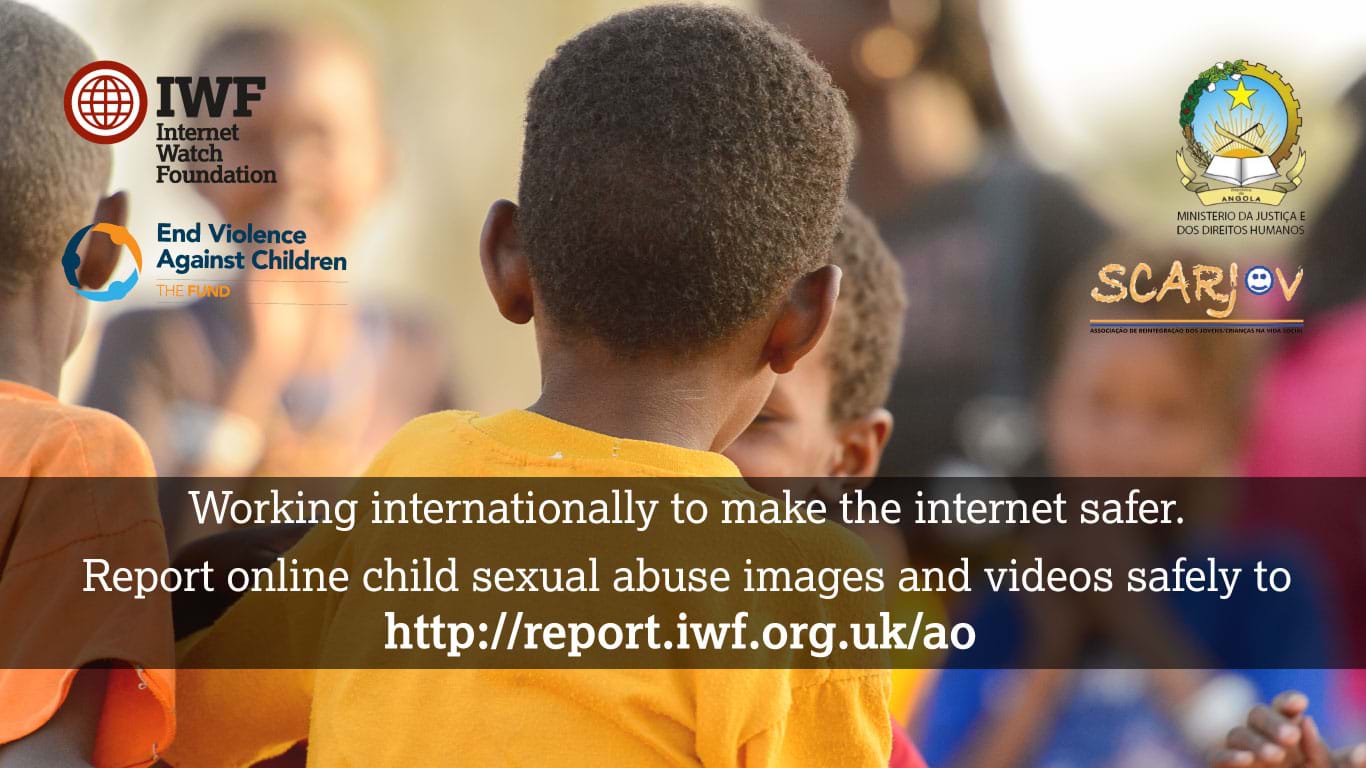 The IWF is a world leader in identifying and removing online child sexual abuse imagery from the internet. The IWF Reporting Portals are a safe and anonymous way to send reports to the Analysts in the IWF, help protect child victims of sexual abuse online and keep internet users safe online.

The Secretary of State for Human Rights and Citizenship, Dr Ana Celeste Cardoso Januário, said: “In Angola, there are 13 million users of the mobile network and more than 5 million access the internet through a mobile phone, tablet, computer and other means. Our children today grow up in the so-called digital era which supports their education and communication, but which can also present serious risks. Children deserve to grow and develop, free from prejudices or harm caused by our inadequate actions, inactions or attitudes of negligence. The launch of this portal is an added value for the Angolan State in the promotion and protection of the Rights of the Child and the fulfilment of the 11 Commitments of the Child. With this IWF Portal, Angola joins the campaign against sexual abuse of children on the Internet.”

This important move has been made possible by a global partnership, dedicated to protecting internet users and child victims.

Susie Hargreaves OBE, IWF CEO, said: “We’re glad to welcome Angola to the growing number of countries who have introduced international IWF Reporting Portals. The Portal will provide a dedicated means for the public to report child abuse material online, safely and anonymously. The launch of today’s Portal sends a clear message to the world, that Angola is firmly committed to becoming a hostile place for abusers to host or share child sexual abuse imagery online.”

Jenny Thornton, IWF International Development Manager, said: “I’m really proud that the IWF has launched a Reporting Portal for Angolans to confidentially and anonymously report online child sexual abuse imagery. These reports can make a huge difference, as the IWF works to identify and take down every image or video of child sexual abuse that our expert Analysts confirm. This helps make the internet a safer place globally and may even lead to the rescue of a child, from horrific abuse.”